BROADCASTGHANA has established that the Independent- Fomena Member of Parliament, who is now the Second Deputy Speaker of the 8th Parliament has decided to caucus with the New Patriotic Party in Parliament “for the purposes of transacting business in the house”.

Lawyer Andrew Asiamah Amoako made this known in an official letter sent to the speaker of parliament.

In a statement issued on January 13, 2021, and signed by the Member of Parliament to Alban Sumana Kingsford Bagbin, the Speaker of Parliament, the Independent MP affirmed his earlier public declaration of caucusing with the incumbent party.

The Independent MP’s decision, however, does little in helping the NPP settle the debate as to which of the two caucuses is the majority party in parliament since a caucus is different from a party.

At a meeting held between the Speaker of Parliament, Alban Bagbin, the Fomena MP as well as Osei Kyei-Mensah-Bonsu and Haruna Iddrisu who represents both NPP and NDC parties respectively, the Speaker asked the Independent MP to formally write and declare which of the two caucuses he will be associating with.

Both the NPP and NDC have 137 MPs each and now that the only Independent MP has made this formal declaration, it will then increase the number of MPs for the NPP caucus by one above the NDC caucus, a crucial advantage when it comes doing parliamentary business unless there is a secret balloting process which could be anybody’s game.

Andrew Asiamah Amoako, prior to the 2020 elections, was dismissed from the NPP following his decision to contest the Fomena seat as an Independent Candidate after he had lost the NPP parliamentary primary.

The then Speaker promptly removed him from parliament against all advice.

Professor Kwaku Asare a.k.a Kwaku Azar and a lot of well-meaning Ghanaians commented that it is only a high court that could declare Asiamah’s seat vacant, citing article 99(1)(a) of the constitution, but Speaker Oquaye did not budge.

After winning the Fomena seat massively as an Independent Candidate, the NDC in parliament nominated Asiamah and he subsequently got elected as second deputy Speaker because he was not an NPP MP.

The constitution is clear in article 96(1)(b) that the first and deputy speakers shall not belong in the same party.

Many pundits including Kwesi Pratt Jnr. have argued that the NDC has shown tactical superiority in getting Asiamah elected second deputy speaker so that he cannot vote with the NPP when he assumes the Speaker’s chair.

READ  I Saw NDC and Mahama leading in 2020 polls -Says The Seer Who Predicted AKufo Addo,Trump & Buhari's Win in 2016 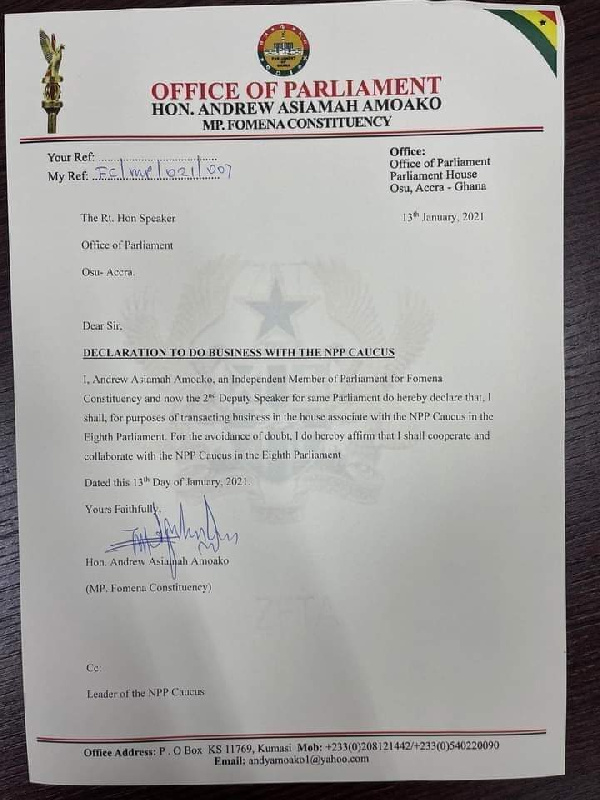 Honorable Kennedy Agyapong has spoken concerning some dissatisfying situations and has caused a massive stir. The member of parliament for Read more

Rt Hon Alban Bagbin, speaker of the 8th Parliament of the 4th Republic of Ghana has finally cleared the air Read more

Finally, the oft has been interred as the ruling party, thus New Patriotic Party is now declared majority in parliament. Read more

A group of men sporting military uniforms has been captured on camera, destroying a signpost erected by a group calling Read more