This comes after a leading member of the governing New Patriotic Party, Gabby Asare Otchere-Darko disclosed that President Akufo-Addo and his cabinet opted not to introduce the price control system in Ghana after careful consideration.

In a tweet shared on Monday, May 30, 2022, the Otchere-Darko indicated that the eras of price control mechanisms in Ghana’s history resulted in hardships for a lot of Ghanaians.

Reacting to the development in a Facebook post sighted by GhanaWeb, the lawmaker however opined that the consideration by government simply meant the country’s economy was near doom.

“I understand Gabby Otchere Darko has intimated that Cabinet considered and rejected proposals for price controls in the wake of record high inflation. The fact that Government was bereft of solutions to the current crisis and contemplated 20th Century policed economy is disastrous for Ghana,” Mr Adongo wrote.

The Bolgatanga MP further said, “Ghana’s economy has indeed been on auto pilot.”

“In contemporary times, students of economics are taught price controls so they know that in some era of human existence there was a principle called price controls with disastrous consequences that must never be contemplated,” he stressed.

He further accused the Head of the Economic Management [Dr Mahamudu Bawumia] of considering to spend tax payers’ money to implement an outdated economic principle which was last used some 43 years ago.

“We are doomed,” Isaac Adongo concluded. 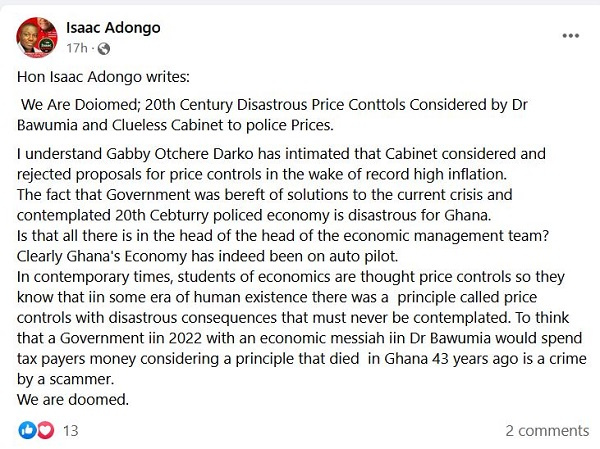