BROADCASTGHANA.NET has established that all is not well on the information superhighways, thus, social media has the latest development from the camp of Abena Korkor drops.

Per what our portal, the emerging news has already set many tongues wagging unceasingly by netizens privy to it.

It would be recalled that a popular Ghanaian Actress advised Abena Korkor to start monetizing her baddest pictures and video than  serving them for free.

In line with that, it appeared the Ghanaian media personality, Mental Health Advocate and Body Positivity Activist, Abena Korkor has finally heeded the advice of the actress and filmmaker, Yvonne Nelson as she joins OnlyFans to sell her stuff.

Abena Korkor took to her Twitter to announce that she has finally joined OnlyFans signalling that no one will enjoy her unclad photos for free anymore.

She entreated her fans to subscribe to her OnlyFans account and revealed that she charges $20 (GH¢159) per month. 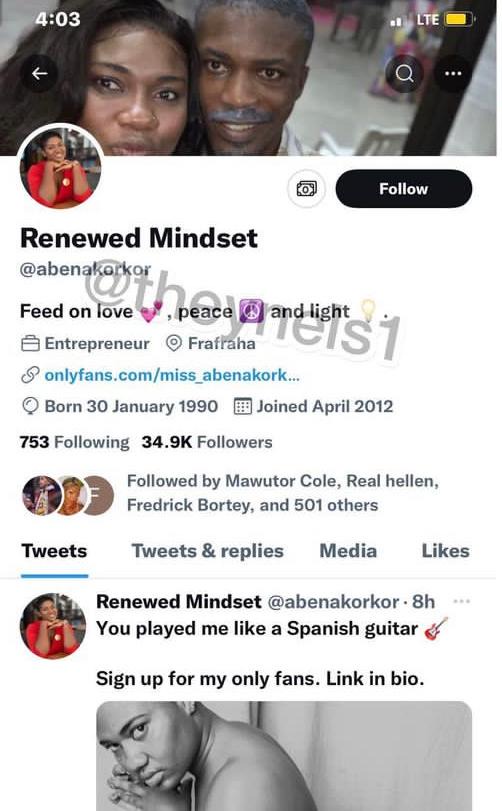 Abena Korkor joins Only Fans a few weeks after Yvonne Nelson advised her to monetize her unclad content online.

Yvonne Nelson dished out the advice to Abena Korkor after the latter shared unclad photos of herself on social media.

The actress believed that the Mental Health Advocate’s decision to post the content on social media was wrong.

The mother of one rather recommended other platforms like OnlyFans where she can make cash off her seductive content.

It allows content creators to receive funding directly from their fans on a monthly basis as well as one-time tips and the pay-per-view feature.